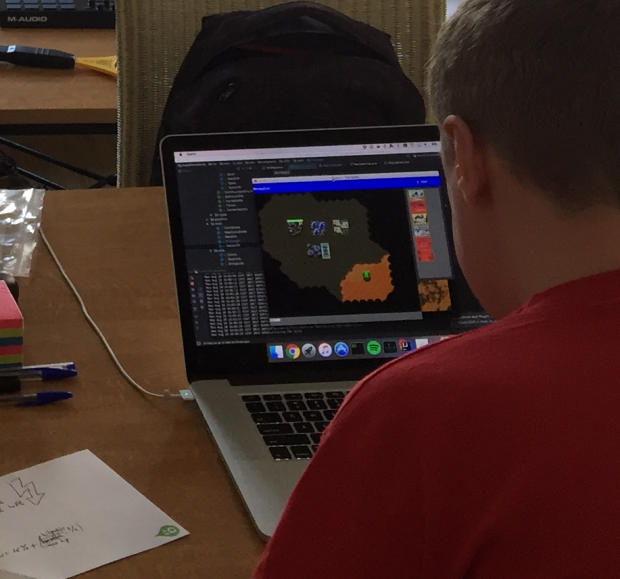 Today I have begun an ‘Incubator week’. This means I have allocated a whole week to work on my game. One week without any distractions, at a separate location. Focussed to work on the game.

And even more awesome, I have some help from Arjen van der Ende for a few days.

In this week we’re going to work on:

A lot of the things to get the Minimal Playable Game finished! I am very grateful that my family supports me to chase my dream and give me the opportunity to work on my game like this! Thanks! Also, thanks Arjen for helping me out!

I asked what was ‘wrong’ in the following code. I had put ‘wrong’ in quotes, because it is an ambigious term. Here is the code:

One thing that we find here, is the use of a session proxy object. This is convenient, because it can do things for us at a centralized place.

So what is wrong?
In my opinion there are several things wrong with this code:
– violation of the Single Responsibility Principle
– dealing with null

How to fix this?
Fixing this may not be as obvious as how to detect flaws. This is existing code we are talking about, and you can’t just make changes without making sure you don’t introduce regression.

Solving the violation of the Single Responsibility Principle
We are reading the state of the sessionProxy to execute business logic. We are actually only concerned if the shoppingCart is set on the session. This could be via a null reference, but it could also be done in a different way. What we want is this:

The method isShoppingCartSet() returns true or false. The implementation will look like this:

The subtle difference is that we now have delegated the question “is the shopping cart set on session” to the class that is responsible for knowing, the sessionProxy.

Solving: Dealing with null
Another advantage by using the isShoppingCartSet method is that we minimize the amount we have to deal with null. We don’t need to check for null explicitly everywhere, we have centralized in one class.

Dealing with null can cause problems, the sooner you don’t have to worry about things being null, the better.

Instead of using a isShoppingCartSet method we could throw a checked exception in the getShoppingCart method. I like checked exceptions, because it forces you to deal with these exceptional situations. It also solves the null problem, as you know it always returns a value or throws an exception when it is (but should not be) null.

There is on caveat here: what if there is existing code relying on the value being null?

The real question is: What does the null value mean? Often it is abused as a status. Some people even use null as a “third boolean” (ie Boolean is ‘true’, ‘false’, or null for ‘unknown’).

As I see it you have an ideal path you want to execute, and then there are things that can go wrong and must be dealt with. In this case, we would expect a shoppingCart so we can do stuff with it. But, if it is not there, we catch the exception and execute other business logic we would otherwise have done with a ‘is null’ check. Ie:

The second example clearly defines a ‘happy path’ (within the try). If you use checked exceptions consistently, you will notice your code will become easier to understand. Try it!

Concluding
A few lines of code, and yet so much to improve. We have found that:

– We can push the null check into a method of the responsible class. Making the class itself able to answer this business logic.
– We should throw an exception when we want to return null. Dealing with null is hard. When you don’t have to deal with null, your code will get much easier.
– When throwing an exception has too much impact, create a child class which can throw exceptions to reduce impact on current code.
– Checking for null upon construction, for a session proxy, is not possible. Only if you create a DTO out of it (but not a proxy).

(I have recently encountered this with Spring 3.1)

Want to validate your forms using Spring? Are you using the form tag and bind it with an object? Got the validator working? But still you just can’t seem to get these error messages showing up? Here is a gotcha that might help you out!

When the user submits this form, the form should be validated. Whenever a field does not validate, it should inform the user about this.

This is done by using:

Where ‘path’ refers to a field in the bound form object, in this case myForm. In this example, I have named my form “myForm”. The theory is that when the form is being validated, the BindingResult (put as “result” on the model), contains all fields that have validation errors. Using the form:errors tag you can make use of that and show error messages.

Although this works often, sometimes it does not and you spend some time figuring out why. A common gotcha is that you forget to put the bindingResult on your model (as “result”).

But there is another less intuitive gotcha.

When your given commandName in the form:form tag does not represent the camelcased, name of the type of the form, the form:errors tag will *not* work. So don’t make up your own name. Make sure it is the same as the type, and make sure it is camelcased correctly. I figured this out the hard way.

Solution: The form object is of type: BackingForm, the expected name would then be backingForm. Change the commandName into backingForm and you will see the form error messages showing up.

When you’re used to Java, you build your software using the comforting build-tools. Popular examples are Ant and Maven. Personally I love Maven.

When you’re writing an application in C++ it seems like a big step backwards build-tools wise. If you’re an Ant God you might feel a bit more comfortable with using Make. However, writing makefiles (the ‘equivalent’ of the Ant’s build.xml) are a more tough.

Since I am used to Maven, there are some tasks I want to perform, like:

To start with. I have set up a little makefile that does this for me and for those who just want to get started, share the makefile with you. But what will you get? It won’t be exactly like Maven…

It took a little while, and I bet it is far from perfect for real C++ developers who eat makefiles for breakfast. But I am happy with it for now.

The directory structure that needs to be in your project is like this (cpp vs mavenized):

When you run ‘make’ you will be doing all tasks. Meaning you will clean, compile everything (your ‘normal’ code and test code) and then copy any libraries, resources and binaries.

Caveats:
– I am compiling without using the -c flag, this simplifies a lot of stuff for me (it works). But, the larger your project the longer it will take to compile, since it will compile everything all the time. So even though you change one file, everything will be recompiled.
– You need to specify sub-dirs when you use them, when there are no files in those dirs the compilation fails (atleast using G++)

Want to see how it is used in a project? Look here.

I really love stackoverflow. It brings developers, good ones, together. And because of the community active there, many questions I had where answered.

However, I dare to say half of my questions where answered by not posting any question…

The reason why? Its simple. In order to get the answer you seek, you need to specify the problem precisely. Just posting “it does not work” with some vague description is not enough. It really helps to tell how you stepped through the problem, post snippets of code and so forth. If you are able to specify your problem like that, chances are high (at least with me) that the solution comes along with it. A so called “aha” moment. To me it is like Rubber Ducking. By the time you are half-way through writing down the exact problem you probably figured out the problem yourself.

Its a win win win!

(don’t forget to credit those who give the best answers.. it’s highly appreciated)

Now I just read that posting your question, while you know the answer already, is a good thing. So the next time… consider that (but make sure your question has not been asked for already :)).

Stefan Hendriks is owner of Kaizen.

Also, see my other project Dune II - The Maker